How do some local ad reps drive so much more revenue than others even when confronted with the same disadvatages and challenges? They don't sell space, they sell response.

Last week, the Hagadone newspaper group hired me to conduct a seminar for their publishers and ad directors company wide to explain exactly this. They wanted to learn why the Hagadone properties who were using this approach were driving so much revenue.

Those of you unfamiliar with our response-oriented selling program, it's based on the idea that when prospective advertisers make a buying decision, it's based almost exclusively on whether or not they believe they'll get a response. They may ask about circulation, visitors, demographics, and the quality of the editorial, but in their minds, these things are secondary. They know even when all those sound good, response can still be elusive.

Given that response requires both an effective medium and message, and given how highly subjective and incorrect most prospective advertisers' theories are on what makes an effective message, proving response is a tall order.

But, if you do it right, it's also amazingly effective at getting past virtually every objection you encounter (be it circulation, cost, lack of budget, and digital alternatives other than your online publication). It allows you to make large, long-term sales where the advertiser wins as well as the publication. This blog is full of examples.

I'm sure there are more, but here's 9 differences between what a traditional ad rep does througout a sales call and what an ad rep does when selling what the prospective advertiser really cares about--response. 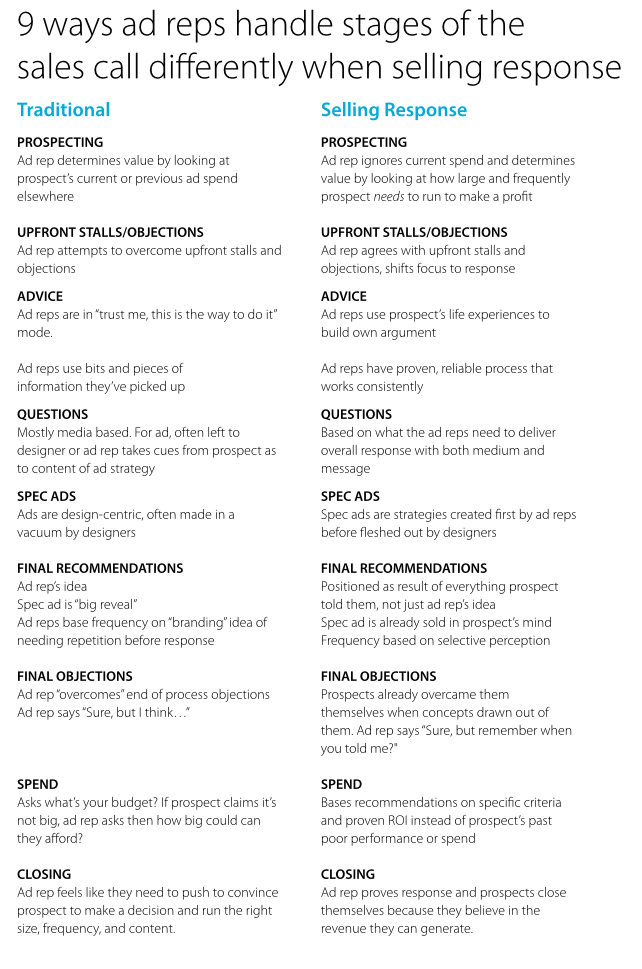 These are dramatic differences. Ad reps not only insist that response is their top priority up front, but they actually follow through by showing competency in driving response and an ability to make something highly complicated understandable.

More importantly, ad reps are able to subtly eliminate the real culprit--the prospective advertiser's conviction that any past failures are due to shortcomings with your print or digial paid media and not their message.

This is quite a trick, but once your ad reps can get their prospective advertisers believing the ad rep is uniquely qualified to deliver response, it will transform the ad rep's ability to generate revenue as well as the advertisers'.

If you'd like to learn more about these techniques or if we can help your publication, sit in on a webinar, read more about our approach, or inquire about our programs.