Overcoming the biggest objection of all 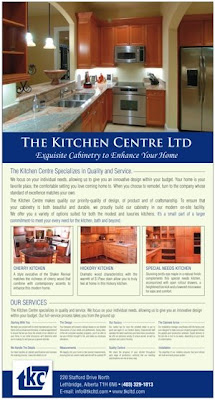 This ad on the right, which sold today for $1,800, is proof about what I'll be talking about today.

I know in my first post I got into heavy detail about the main problem and solution to driving serious local newspaper advertising sales in this recession, but in this post I want to focus more on the one biggest objection local advertisers are giving all over North America as they try to explain why they're cutting back or dropping out. They're both right and wrong at the same time.

Here's their logic: Since there are dramatically fewer people buying their products or services today, and therefore fewer or none responding to their ads, they can't justify the kind of money they were spending previously.

They're right, there are less people out there about to buy. What they don't realize, and the really good news for both them and the newspaper, is that the ads they've been running previously are just a fraction as effective as they could be. I'd bet money on it.

And that's the key to driving some serious ad revenue right now.

Because, if they could just improve their ads by including the right content and running the right size, they could capture the attention of every one of those few people about to buy their products or services (instead of only a small percentage as they're probably doing now) and get them all reading on and coming in.

The message to your advertisers needs to be, "Sure, there are fewer people buying, but there are certainly plenty of them to make a serious profit from your advertising. You're just going to have to change the way you go after them."

And that's really the case. We all know people who are buying things. Personally, I just helped my neighbor carry in a stand for his new plasma tv, my father-in-law just had new counter tops installed, my brother-on-law went on a cruise, and I'm sure you know people spending money as well.

There are just fewer of them. But you can make up for that--and get your advertisers back to or exceeding the levels before this recession--by making your ads work much harder. That's where the money is and that's where you should be focusing your efforts.

Of course, don't forget that creating the effective ad is not going to make the sale. You've got to prove it to them by eliminating their old theories and replacing them with new, better ones, as I described in my first post.

For those who have taken our Response Oriented Selling course or are members of our DesignYourAd Overnight Ad Production service, you can use this ad as a template. Just ask for ad 1008-The Kitchen Center-87-V1a or select it from our gallery of effective product and services ads.