Our new StrongResponseNow newspaper advertising seminars drive $800,000 to $1 million in a week 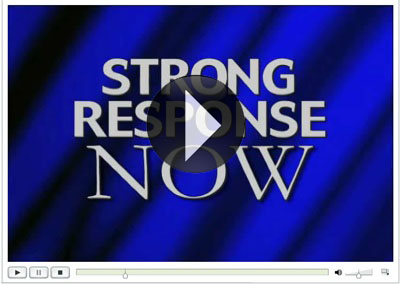 At the request of a client, for the past month I've been hard at work developing a new version of our prospective advertiser seminar where we close attendees on the spot. It's ready now and just mentioning it to a few other clients has nearly booked me up for the year. You'll see why in this post.

Called StrongResponseNow (see one way we promote it to the business community with this video), it's similar to the "Driving Response In A Recession" advertiser seminar I now conduct as part of our Response Oriented Selling ad sales training.

However, with this version, newspapers will drive revenue in the neighborhood of $1 million in contracts right away, depending on the size of the newspaper and the rates it charges (see estimates below). Whether you're a past client or not, I'd be happy to show you how we can do it for your newspaper. And since I get paid mainly on commission, there's not a whole lot of upfront expense (or risk, for that matter). Just email me at mcinnis@ads-on-line.com or call me at (631) 477-2505 for details.

While we understand that teaching a man to fish feeds him for a lifetime, we also believe in this economy there's nothing like someone coming in and producing a huge chunk of cash for your newspaper fast. And nobody can execute the selling techniques I teach in our course and discuss here better than me.

While they're still positioned as advertising effectiveness seminars, they're smaller and more of them, with only a few attendees at each one, one per ad rep. Some sessions are for advertisers who should be running relatively small ads each week but aren't even doing that. Some sessions are for higher-potential businesses where a two-stage close would be needed.

Toward the end of the seminar, we show attendees their own print and Web-based spec ads created in advance by our agency-quality DesignYourAd overnight production team (based on information gathered earlier) and I explain why each uses the response techniques that they just bought into during the seminar and why they'll drive significant business for them, even in a recession.

Each ad rep would have one prospect attending the session and after I prove why their new ad strategies would work, the ad rep would then turn to the account and offer them an attractive rate package if they commit to a yearly contract.

In the seminars for higher-potential accounts where larger ads are recommended each week, a shorter "trial" contract would be offered to enable the account to test the ad and newspaper's effectiveness. Within a certain amount of time (30-60 days), the contract could be converted to a yearly one to hold the rate.

Since our compensation for these seminars would be mainly based on commission plus expenses, the amount of seminars could be virtually unlimited without incurring much of an expense.

As you can imagine, the numbers add up fast. Here's the revenue straight out of a recent plan for a 16,000 circulation daily who will be holding these seminars September:

As you can imagine, there's a lot of preparation on my end for these, which means I can't do as many of them each year. Whether you're a client of ours already or have never brought me in over the past 15 years I've been doing this, give me a call or shoot me an email and I'll show you how together we can make some serious revenue in this recession.
Posted by Bob McInnis at 10:35 AM