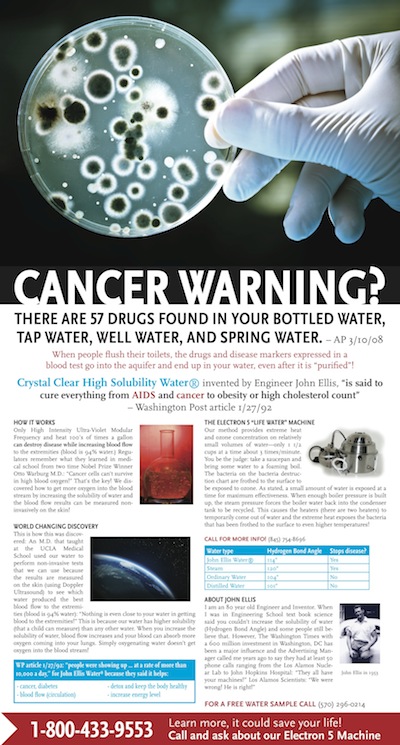 This is a perfect example of how you can make major sales simply by fixing the prospect's preconceived notions of size, frequency, and content (in this case using our Response Model) and then creating and presenting a new ad strategy based on the new approach.

Invariably, it helps your prospects understand how incorrect their own assumptions are that lead them to tell you that nobody's reading your newspaper, that your rates are too high, that your circulation's too low, that the better publication can simply be judged by how cheap it is, and that it's too much of a risk (often verbalized as they have nothing in their budget).

This particular newspaper, who had recently taken my Response Oriented Selling course, had reapproached this former advertiser who had been running another, mainly text-based ad (see the "before" ad further down). He hadn't been sure if he was getting any response and stopped running altogether.

The prospect was selling a water machine he invented that claimed to have incredible curative properties. He explained his machine was able to make water more soluble, which enabled improved blood flow to the extremities, which, he claimed, helped with all sorts of conditions, from AIDS to cancer.

I was more than a little skeptical, but who are we to judge, and besides, his machines were in use at all sorts of major institutions from the Los Alamos Nuclear Lab to John Hopkins Hospital. To make the sale, it was our job to help him with his message.

Our concern was that the ad itself was looking a bit dated and its all-copy approach might in itself make his prospective buyers skeptical. So, after drawing our advertising principles out of the prospect (and simultaneously eliminating his incorrect ones that led him to not run), the ad rep got to work on a new ad.

The new ad was created to do a number of things the first one wasn't. First, it just looked more scientific. The idea was to add some credibility to the ad by just giving it a more medical look.

Second, we tried to put the key issues and benefits at the top, mainly how many drugs are still in our water supply, as well as that his high-solubility water can help with all sorts of ailments. Credibility was added by including the publication date of a couple of Washington Post and AP articles.

Third, fourth, and fifth, we reworked some of the body copy to make it flow better as well as broke up the text with some little sub-headlines in bold and then added some scientific-looking images. 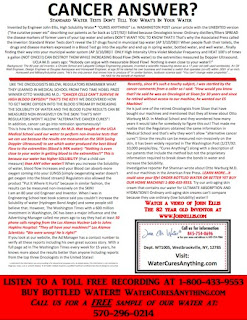 The result, of course, is a beautiful ad with a killer strategy.

When the ad rep walked the prospect through the logic of the ad (based on the approach he drew out of him on the first sales call), the inventor immediately saw the potential of the ad and why the newspaper itself wasn't the problem and signed up for a number of full page ads on the spot for $8,000 total.

If you're having difficulty with a prospective advertiser, don't assume it's about rate or circulation or budget even when they swear that it is. If you can change the underlying assumptions about what drives response and then move on to deliver a great strategy, you'll be amazed at how often they'll end up running something significant. It'll make a dramatic difference in your ad sales.

We, and many of our clients, think it's the single biggest thing you can do to drive serious ad revenue. It's a must in this economy to make the larger sales.