My previous post showed the managing director of the U.K.'s Archant newspapers introducing me to half of his staff (about 315 ad reps) a couple of weeks ago. A number of ad reps have since convinced their prospective advertisers to return to their publications and run larger and more frequently.
I'm trying to get my hands on the "before" and "after" ads, and here's one set which is a typical example of what selling response, and Response Oriented Selling is all about.

Daisy Kingham, an advertising sales executive at Archant's Norfork division, had a custom (or bespoke as they say) kitchen remodeler in her territory who wasn't running with her at all.

Daisy stopped in and was promptly told that print, and her publication in particular, didn't work for them. Besides, they said, her publication was expensive and there just wasn't a whole lot of people remodeling their kitchen in this economy--all objections that signal to our client newspapers that it's time to move into the Response Oriented Selling techniques. Honestly, there are few objections where you wouldn't use this approach.

Daisy went on to explain that their experiences weren't unique and, as with all types of advertising media, that other advertisers had experienced similar issues before. She proceeded to share an example, along with the unique advertising effectiveness techniques that were used to subsequently get the advertiser a dramatic response. Daisy then offered to quickly share the new approach with the prospect, which, of course, he was open to hear. 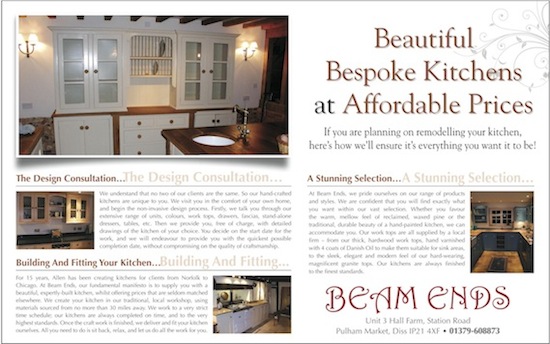 These half page ads were plenty big to get everyone going through the newspaper that day about to remodel their kitchen to see the ad and contained enough substance to get even those planning on calling the place their friend told them about to think twice and call them instead. Even a bad response would make them a profit, of course.

Let's face it, of all the things a prospective advertiser would be willing to talk about, how another advertiser is making a killing in this economy isn't exactly at the bottom of their list.

Daisy then went on to teach (actually draw out of) the prospect what we call our Response Model, which, according to Daisy, he completely bought into.

From that point a major sale was fairly certain but, of course, there was some work to do. Now firmly into the highly desirable "partner" mode and out of the "vendor" mode all prospects try to place you in, the prospect was willing to provide plenty of information and answer any questions she had. Daisy then left and returned to the office to consolidate all the information into an ad strategy she could later present. This is an alternate ad our overnight design team also came up with. I really liked this one, too.

"Actually, I wanted to wait until non-selling time to create the strategy, so later on that night, once I got the kids to bed, I got to work applying the Response Oriented Selling techniques and create the ad strategy".
"While the original ad had some good elements--a graphic to catch the people sensitive to remodeling their kitchen, a good benefit headline, and some detail, I found the detail so lacking that I feared those people who may already know of a kitchen remodeler might not be convinced to switch."

"Besides, the ad was clearly too small. So many great prospects would miss it that there might not be anyone left to actually come in and make the purchase. And clearly even a bad response would make the advertiser a profit". So Daisy created a half-page ad--which would be a huge jump for a non-advertiser that claimed they had no money to spend.

Daisy sketched out the ad, wrote some excellent copy addressing the issues people care about when choosing one place rather than another, and I offered to have our DesignYourAd designers make it look better. The next morning, Daisy got back two versions and she chose the first one (though the second one is fantastic, too).

Daisy returned to the prospect the day after her first meeting, and first reiterated how her publication reached exactly the target customers in which they said they were interested.
Typically, a prospective advertiser is on the fence at this point and so Daisy used the ad strategy to "push them over", though it's really more like drawing them along. She went on to explain how she took the information about their products and services, competition, and target customers and used the new approach (she also drew out of the prospect) to create the ad she then presented.

The trick here is, of course, when you do it right, that the final recommendation isn't the ad rep's idea, it's simply the logical result of everything the prospect told her. An incredibly effective way to turn around even the most reluctant prospective advertisers.

That's why many of the ad reps who get good at this approach have virtually a 100% closing ratio. Besides the work she had to put into the strategy--and let's face it, in any sales position you're supposed to do your homework and some analysis before presenting--it was an incredibly easy sale.

The customer bought the ad and thanked her for it. A truly win-win scenario.

Daisy's already working on her next target account ad, a garden center, and I'll share that one with you if and when it sells. No doubt it will.
Posted by Bob McInnis at 12:38 PM